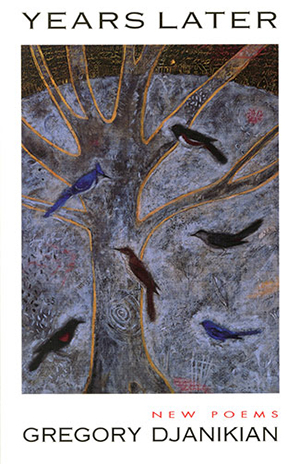 The book is not so much governed by a presiding sensibility as by a central notion—that of “two neighboring solitudes” suggested by its epigraph from Rilke.The poems begin in circumstance and move to insight. Djanikian looks at the undersides of unrequited love, the boredom that is in marriage, the unexpressed desires of neighbor, stranger, and self, as well as the odd, crazy, joyous coincidental moments of our lives. One could think of Years Later as a series of persona poems, but the project is far more subtle than that… Djanikian’s “camera” pans the crowd, employing every possible pronoun in order to try out various angles of vision. His pronouns do not act as a stand-in or mask for the writer as they do in so many contemporary poems; rather, they attempt genuine exploration of otherness…With its gentle handling of psychology and its playful speculations, Years Later is even more a study in tone. Tone dictates what attitude the reader will take toward content, and Djanikian masterfully modulates tone, playing something in each key in order to give us the full range of experience.
—Judith Kitchen, The Georgia Review