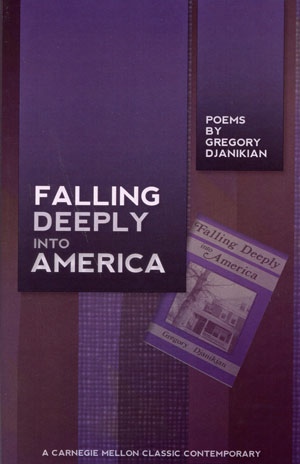 Djanikian’s second collection, a thought-provoking yet lyrical volume, opens with the poet’s musings on his early years in Alexandria, Egypt, and the problems he faced when, at eight years old, he came to the U.S. In some of these poems, such as “In the Elementary School Choir” and “How I Learned English,” Djanikian exhibits a wry sense of humor; in others, he reveals his sense of wonder over the New World and the experiences it offers (as in “When I First Saw Snow”). Many of his poems focus on children, his own and others’, and on the problems and joys they share. In all his work, however, Djanikian begins with something like reportage—factual information, conventional imagery, etc.; late in the poem, though, he shifts modes and the world turns suddenly surreal, or perhaps only peculiar, though always gripping. Djanikian is masterful in his control of where a poem is going—and the reader with it. An excellent second volume.
—Booklist

Falling Deeply into America is one of the most even-tempered and joyful collections I’ve encountered recently. Its thirty-four poems have been neatly bracketed into three sections: those depicting the poet’s childhood home, Egypt, and his immigration at the age of eight to the United States; poems of fatherhood; and a final section of miscellany. By far, the most striking of the poems are those recounting boyhood impressions of Alexandria…At their best these poems recall the early work of Derek Walcott, with their classic stoicism, and that other Alexandrian, Cafavy, with their delicate minimalism…Wildly fresh, with a foreigner’s tilted view of America, poems such as “When I First Saw Snow, “In the Elementary School Choir,” “How I Learned English,” “My Aunt Gives Me a Clarinet Lesson,” and “Clouds” offer installments in an Egyptian boy’s passage toward citizenship. And in the Waspy realms of American poetry, it is a unique and welcome point of view.
—Henri Cole, Poetry